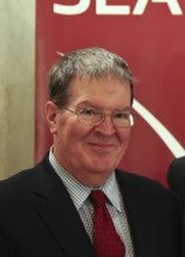 Robert (Bob) van Riemsdyk is originally from Chicago. He studied at Northern Illinois University in DeKalb, Illinois where he received his Bachelors in speech therapy. Bob then received his Masters in special education. It was then that he began a career in caring for learning disabled children with low or sever learning difficulties.

His continued education at DePaul University and Loyola University in Chicago have allowed Bob to obtain an education certificate. This led him to become the President of the Homewood Teacher’s Education Association. As president he has had to negotiate wages, course content, health insurance and teaching retirement,  as well as various articles spanning the contract between the Board of Education and the Teacher's Union. In short, teaching children with special needs and representing the teachers union resulted in two words "Be organized!". Both missions involved the division of objectives in different tasks.

It is with great pleasure that Bob shows off the attractions of the city of Chicago. His family has lived in Chicago for 4 generations. Also, Bob's heritage is made up of German and Irish, and can be traced back to the 17th century. For Bob, nothing is more fascinating than seeing the faces of amazed visiters seeing the beauty and immensity of our gigantic lake Michigan, or seeing them contemplate the grand sky-scrappers, but also admiring our garden (Grant Park) and the majesty of our Museum Campus.

Along with being a program coordinator here at Seagull Institute, he is very proud to show off Chicago, the "Second City" of the United States.
Back to Our Team